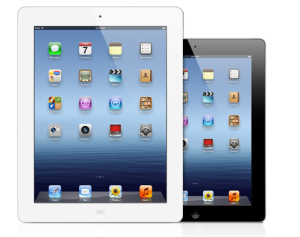 After a week with the iPad mini, I am starting to get a feel for it.

First, I miss a Retina display terribly.  I got glasses for the first time in my life earlier this year, and they really helped me enjoy the sharp clarity of the Retina display.  The difference in sharpness, in particular (oddly) with the system font is striking, although most text in decent websites and apps is quite good.  I can whine about it all I want though, at least until they create something like a Retina display iPad mini.  I can say that iOS7 doesn’t make it look any worse, and in some cases it may be a bit better, but I switched to iOS7 almost immediately so it’s hard to say for sure.

When we traded originally, my wife was using an iHome keyboard case and had another simple case from Belkin she had tried.  Honestly a case with purple spots all over it wasn’t going to work for me, so I stuck with the iHome keyboard case for most of the first week.  That was a mistake.  I see some value in the keyboard, don’t get me wrong, and luckily it is detachable.  The bulk and weight, even the rubberized texture of the case made the mini seem clunky to me, and I really didn’t get it until I pulled it out of it’s case.  By itself, the mini is a perfect fit for my hand and so light compared to the iPad.  I was shocked, honestly, as I’d never really even tried to use it before, other than helping her set it up.  I hadn’t expected how nice it actually felt to carry it around, like a feather almost, compared to the Retina iPad.  For reading an e-book, it is perfect in size, shape and weight and FAR more comfortable than the iPad to hold for a long time. 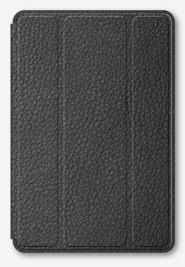 I gave up and went to find a folio case that made more sense for the mini and ended up with the elibrium Style365 DesignFolio in basic black.  It weighs almost nothing, has the smart cover features and is basically a cheap version of Apples iPad smart case.  It has made a huge difference.  I carried my iPad pretty much everywhere, but the mini really goes with me now – I’m in the process of scanning in as many customer docs as I can to make it so that I rarely will have to carry more than the iPad and an invoice or two.

My wife, on the other hand, is thrilled with the switch as well.  She uses the iPad far more than she used the mini.  We have a keyboard for the iPad and she uses that as well, but I’m surprised at how much more comfortable she is with the larger screen.  She needs new glasses right now, so she doesn’t quite get the difference of a Retina display, but the larger text on the iPad makes it easier for her to read anyway.

This may become a permanent switch.  I admit it’s kind of nice to just have the one adapter type between my iPhone 5 and iPad mini as well.  If Cook and Ive can figure out a way to fit a Retina display on one of these things, I’m going to have to go sell my last kidney or something to get it.